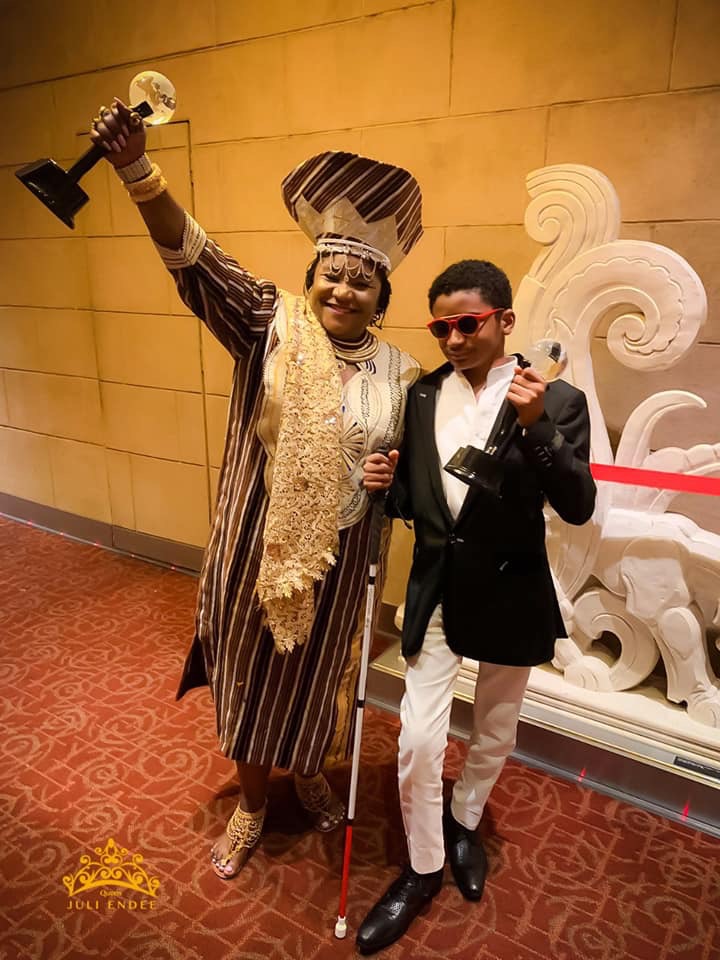 The 2018 AFRIMMA awards have ended with big names like Fally Ipupa, Yemi Alide, Eddy Kenzo, Flavour, Too Fan, and not forgetting SEMAH G of Liberia staging outstanding performances.
SEMAH G, a Liberian born has taken the music scene by surprise after being introduced to the world at large by a renown and an award-winning, cultural ambassador to Liberia, UNICEF goodwill ambassador, and the no shaking Queen Ambassador Madam Juli Endee. SEMAH G was later featured by Africa platinum award-winning artist Mr Flavour Nabania of Nigeria. Their works have attracted millions of views since it released. SEMAH G won the 2018 AFRIMMA shinning star award while Mr Flavour won the 2018 AFRIMMA Humanitarian  and Best Live Acts Awards, and in no time on stage, we saw Madam Juli Endee being presented with the 2018 AFRIMMA Beacon of Hope award a courageous award which highlights the success stories of Semah G dream being made possible of meeting his favourite superstar Mr Flavour upon his invitation to Liberia by Ambassador Madam Endee. Mastercraft, Semah biological mother Fatue Sekota, as Semah G said, were among others on the stage as they receive their awards. The celebration continued with the Queen Madam shaking to DENG – Kemah. on a climax, Mr Flavour and SEMAH G, with a standing ovation from the crowd, took the stage to perform their award-winning track MOST HIGH. In other light, Ambassador Juli Endee and Semah G have also won awards at the past HAPA awards. which was staged in the USA a few days ago. We couldn’t miss the heartbeat of Liberia celebrities being spotted at the event as we represent the majority of supporters around the world. Liberia international pop diva LORTONIO and her PR and talk show host RODA STARLET of The Social Lyfe were both spotted hanging out with big names like Fally Ipupa and MasterCraft. Roda wrote “You can’t slay with us !! IT’S ROYALTY BABY!!” on a photo posted with Lortonio before the event

In few videos, we saw the highly concentrated and focused LORTONIO washed on as other performers took to the stage an energy beyond expected. We look for to 2019 and the future and hoping to see what other Liberian artists will bring to their various stages and most importantly to the world stage at large.

Yemi Alide and Eddy Kenzo two powerhouse performers brought the energy with both performings few of their hit songs earlier during the event. Yemi with her ethnical love for Nigeria culture was fully customised in her all-black attire partially covered with the infamous Nigerian bees and mixed with a South African hat. Her ban was outstanding in a full playback of African sound through the performance.

Fally Ipupa – Artist of the year  and Leadership awards

Wizkid – Song of the year (Soco)