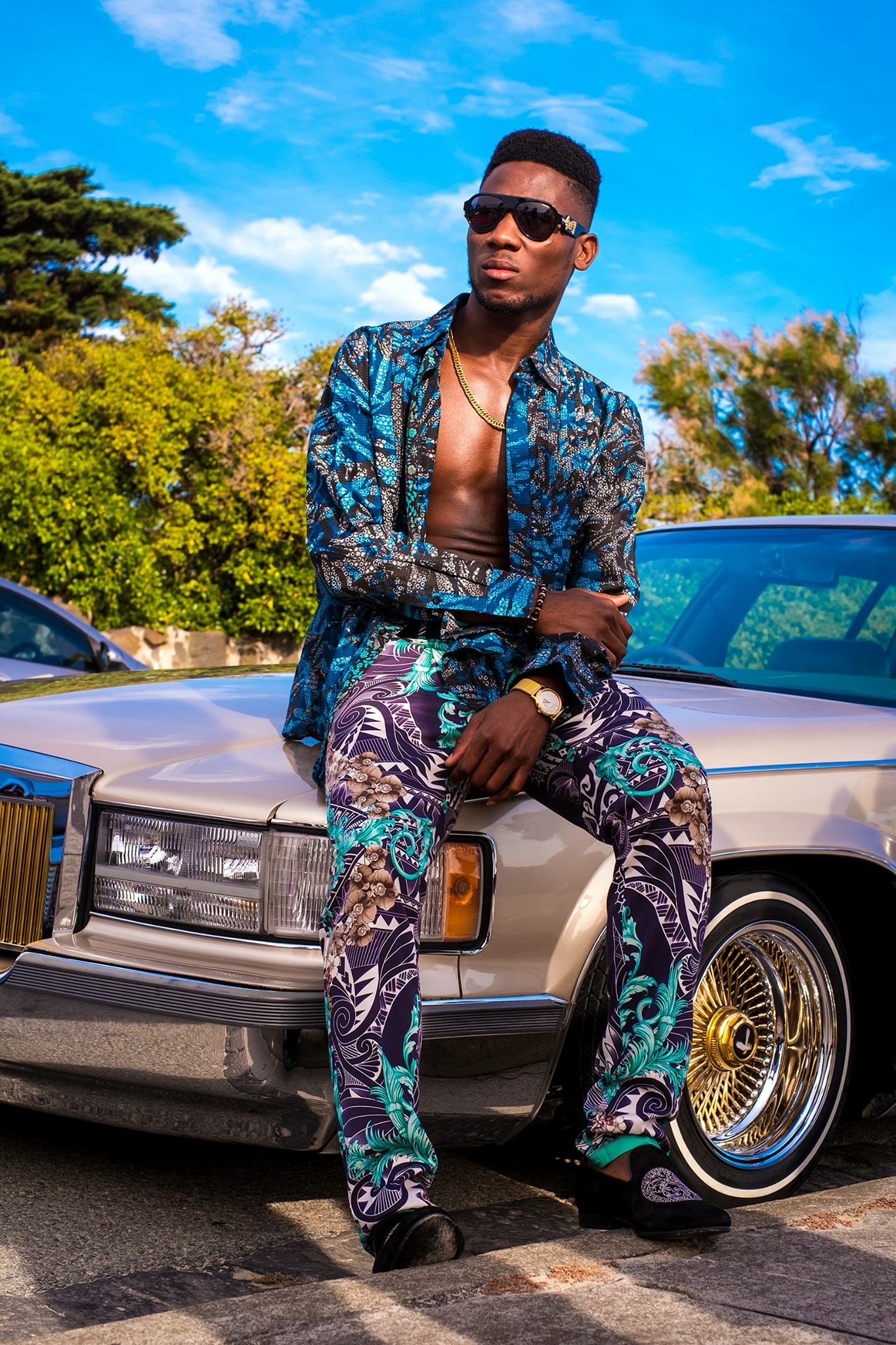 Posted at 22:50h in Entertainment by leaa0 0 Comments
0 Likes
Share Patrick E. Tolbert alias Eazy P whom many called the godfather of Liberian music in Australia. The said legend has been in the music arena for quite sometimes and undoubtedly he has become a household name. The multi-award winner has collaborated with many international big names like Liberian sensations CIC and Eric Geso, Ghanian most talk about celebrity Stonebwoy, and Nigeria duo Bracket. He is talented, handsome, professional and most importantly a father. Unlike others who put career before family, Eazy P is the opposite and few of his tracks speaks for itself. check out few of Eazy P works:  If Only ft. CIC Stick It There ft. Bene vee & Shine P Going MBad ft. B’Cole African Girl. Eazy P is set to release a new track called My Jersey. Patrick Morie Bannah, the new bread to Liberian music taste. ConCcoins is a unique artist with his own style of music called Afroholic a recipe that gets his fans intoxicated to his style of music and won’t let go. The artist signed to Price Records has released four tracks within a year of signing to his current label. He speaks reality, our daily lifestyle, the reality behind every success and much more. ConCcoins has been on the scene for over two years and his potential to bring the heat doesn’t seem to quiet down anytime soon. The young star has also become a household name since stepping on the scene with great work like JUDGE a track that reflects our daily lifestyle. Here are few of ConCcois work JUDGE MYOB Legitimate Man Expensive Chick Patience. Rueben Karpeh, a senior icon to the peak rise of Liberian music around Australia. He defied all odds when he first dropped a delicate track called Australian Girl. The footprint acquired from the release of the track remains as one of Australia all-time favorite moment. Once called Sugarboy, the star changed his name to Mr. Shugga a true representation of growth. Mr. Shugga is a personal trainer, a father of two handsome boys and one we are proud to call a true Liberian superstar. Mr. Shugga is a reference icon to success stories when it comes to peak growth within the music industry. His work is a mixture of pop and dance and once you’re glued to Mr. Shugga tunes, you can never go wrong. His career span way over half a decade and here is his newest release track called Mami. MaMi Temperature Love is all we need Cuzin trouble. Ibrahim Hoff a true son of the motherland born to half Nigerian Liberian parental background, the superstar is a full package any record label will require. Formally a member of Gstar Boys, Lowkey has set a benchmark for himself as one of Australia all-time favorite superstar. Well known for his swag, great charisma, and physical appearance, the star is all in all a full bundle. He is solo and has been working on his debut album with release dates to be announced. Recently featured in Currency Baba 1 by 2 track, Lowkey reps his true color flipping his style like never seeing before. check out few tracks featuring LowKey They 1 Know Raymond Kamara was formally known as Eray now Rayon Ray, the artist first emerges on the scene as a pure western R&B star. Rocked the music industry around Australia for years before returning to his root as an African artist. Ray is a member of a group called E Plus. Together the group has accomplished greatness in other terms. Ray is of Liberian background with many speculations on the street that the superstar is also of Sierra Leonean descent. We characterize Rayon Ray along with his style, charisma and performance skills as Australia or one of Australia best R&B singer. Check out Ray few of ray tracks Speculator Moko You and I Party Animal Kolando Zulu King of gbemah music alias K Zee, there’s nothing and no one we can compare to this musical genius. “Started from the bottom now he’s here” is a term we used locally to describe the hustle and struggle of Mr. Zulu. Currently signed to King Records, K Zee is a star from the moment we all heard of him. He has toured the world with countless numbers of cities visited all in the name of music. The gbemah king is a solo multi-platinum awards winner with no stopping anytime soon. Feature on Spoil you with love by Joseph Dean which went viral with a whopping one million views on youtube. The superstar is currently married and has settled in Australia as a permanent resident with citizenship insight. check out few of K Zee works Kountry Chicken Nenuh featured by Dj Flexz In Love Hitch Zito Ballo Z-I-T-O as his signature vocal goes. Zito is a producer, disc jokie, and an incredible rapper. He spend countless amount of time mastering his productions and recording. Zito has over the years work effortlessly hard to promote Liberian entertainment through his musical talents as either a dj, producer or performing artist. The rap artist has caught the eyes of his fans when he released LOVE. A track that speaks againt inequalities and the world being free from injustice. Filled with more positive puch lines lyrically, Zito is of no competition when it comes to his unique style of music. Currently signed to Infectious Michael Heatbeat Records, the artist is solo and has recently released lots of ambiguous tracks. Attitude is another banger from the artist. Gemacco Dennis was formally called Gemacco or others would refer to him as Lib Michael Jackson. The artist started off as a professional dancer and was well known for his creativities and unique style. Gmacs moved on to become one of South Australia all-time best solo musical genius. He later teams up with Mr. Shugga on series of performances, tours, and tracks in brightening his career and gaining more fans. Gmacs has now moved on to becoming a Gospel artist with his first single to drop in 2017 called DANCE. A youngster with a bright future through music, Gmacz has always been a good supporter of Liberian entertainment growth in Australia. Timothy Kojo Banks as we know him. A movie producer turned musician with great enthusiasm and one of Australia hard workers to ever emerge as an artist. Tim for short has been around for over a decade working as a movie producer. The artist works payout when he releases series of interesting short and full films to the Australian market. Tim later drop the bar and went on to become a solo gbemah, pop artist. Recently Tim has been making waves with incredible sound and lyrics combined with the catchy phrase like “Hold me tight”, “work for my visa” which relates to anything and everything depending on the usage. These are few works from Timmy banks Hold Me Tight Work 4 D’visa Freddie L. Sarpor alias Nez B is a quiet, intelligent, respectful and humble artist we can all call our own. The artist recently steps on the scene and has been in much demand than any Liberian artist to have ever stepped on the scene. Some refer to him as Liberian Patoranking, Nez works speak louder than his appearance. In recent performances, Nez B has gone from being an underground rapper or new artist to a household name which got all the teenagers whipping for his look. We say he’s as skinny as Pato and will accomplish many dreams but the artist has other agenda under his sleeves. Currently signed to Electric Head Studio, the artist work is pure of Liberian origin. Currently, all of Australia is trending the phrase “Pepper can’t hurt in one eye” a track recently released by Nez B called Pepper Hurts. Don’t Go is another hit track from the rapper which also featured K Zee and his than co-label mate Darius. Oliver Daye c.k.a Rude Vandosky the mystery man. Out of nowhere came Australia all-time best dancehall king with two undoubtedly hot bangers. Rudeboi for short has a phrase that goes “You’ll like it by force” or “You force to play my son”. In recent incidents, we’ve heard of Rudeboi demanding DJs and fans to play and love his songs without any hesitations. I guess every artist has that unique talent that connects them with their fans. Rudeboi has been featured in many events since he emerges as an artist from club appearances to an awards ceremony. His style is unique and with straight up dancehall street and club vibes. Father to two boys, Rudeboi has continuously contributed to the growth of Liberian entertainment in Australia. At first, the artist was one of the senior soccer stars for the then Victoria Liberian soccer team and later became a fundamental promoter for Liberian entertainment around Australia. Check out his works Never Die Young Big Jue can fart